Monday, guest host Benjamin Bombard is joined by food writer and cultural historian John T. Edge for a look at the burgeoning food truck scene in the U.S. It's a cuisine Edge calls "the culinary equivalent of the Great American Novel." Chefs are creating adventurous foods on city streets where diners can get a great meal without a dress code or exorbitant prices. John T. Edge is coming to Utah as a guest of Weller Book Works and he'll take us on a tour of America's best restaurants on wheels.

John T. Edge is director of University of Missippi's Southern Foodways Alliance. His book is called The Truck Food Cookbook. On Tuesday, June 26th at 11:30 a.m. join Edge for lunch in the Trolley Square South parking lot. He'll talk about the book, and you can buy lunch from the Chow truck, the Better Burger truck and the Bento truck. The event is hosted by Weller Book Works.

Ted Scheffler is the Dining Editor for the Salt Lake City Weekly. He also writes for Park City Magazine. 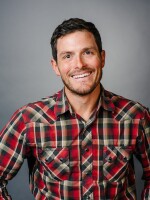 Benjamin Bombard
A Salt Lake native, Benjamin Bombard served numerous internships in the KUER newsroom before becoming a producer of RadioWest. He aspired to the position for years, and in his sometimes wayward pursuit of it he has worked as a print and radio journalist in Utah, Wyoming, and California, a horse wrangler, golf course “bag rat,” dishwasher, janitor, bookseller, children’s museum guide, barista, linecook, and a male nanny or “manny.” He has dished up gelato to Mafiosos in Rhode Island, and worked as a volunteer for a health NGO in Mali, West Africa, where he politely declined an offer to act as a blood-diamond mule. He values holistic personal fitness and good, honest food. Most of his free time is spent writing, reading, preparing for hunting season, hunting when it's hunting season, and otherwise pursuing an overabundance of diverse interests and passions.
See stories by Benjamin Bombard